We propose a walk through the winding streets of the city center. In this way, you will discover everything that has happened within the walls of the city throughout history and, above all, you will delve deeper into the places where power has resided and where it continues to reside: the forums, the convent, and the square. Total distance: 1.68 kilometers

The route begins at the THERMAE ON PONTEZUELAS STREET (1) situated on a plot that was formerly occupied, until the year 2002, by a ham-drying facility in which remains of dwellings from the first century were found (outside the city walls). Likewise, along with said remains, also found was a thermal bath complex whose structure is almost entirely intact.

A few meters from the thermal baths, on the corner of José Ramón Mélida and Sagasta Streets, a residential building was built whose basement houses the Mosaic Interpretation Center. There, you can see a small section of the wall with a round tower attached. Inside the wall and attached thereto, you can find several rooms belonging to a house, one of which has a two-colored mosaic floor. Next, you will arrive to PUERTA DE LA VILLA (2), a square in whose center stands a fountain with a bronze female statue. It depicts archeology as a woman dressed in Roman style, holding a laurel branch in one of her hands. The piece is the work of the famed local sculptor Juan de Ávalos. It was made in tribute to the archaeologists who started excavations in Mérida at the beginning of the twentieth century. If you look to the back, to your right, you will discover the presence of another statue – in this case made of marble. It is the ideal depiction of the Martyr Eulalia, the city's Patron Saint. It was done by another sculptor from Mérida: Eduardo Zancaza. 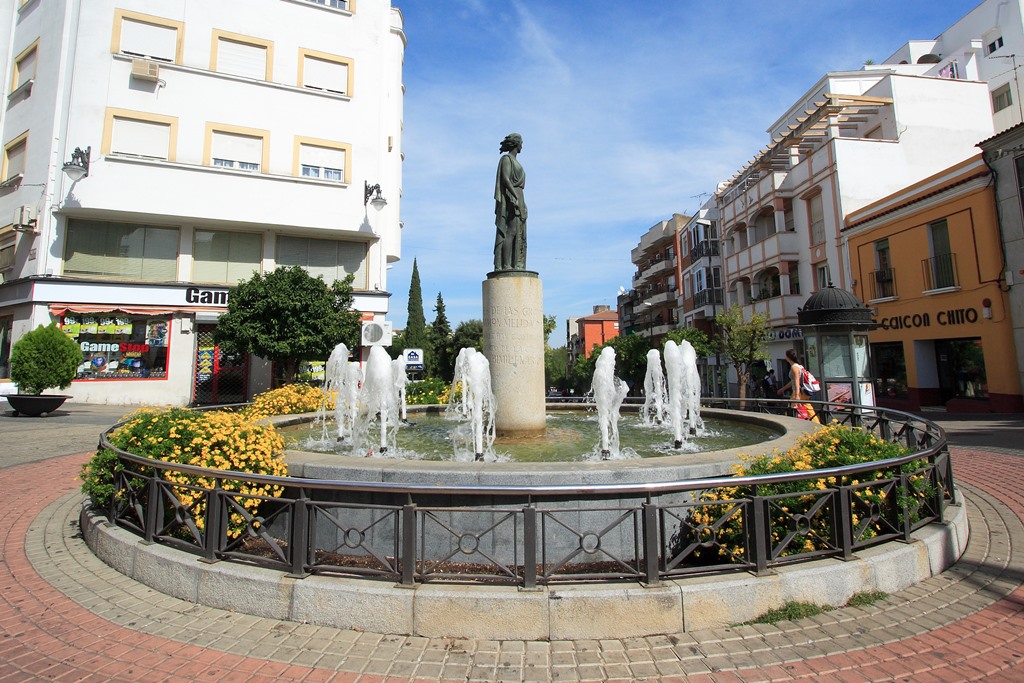 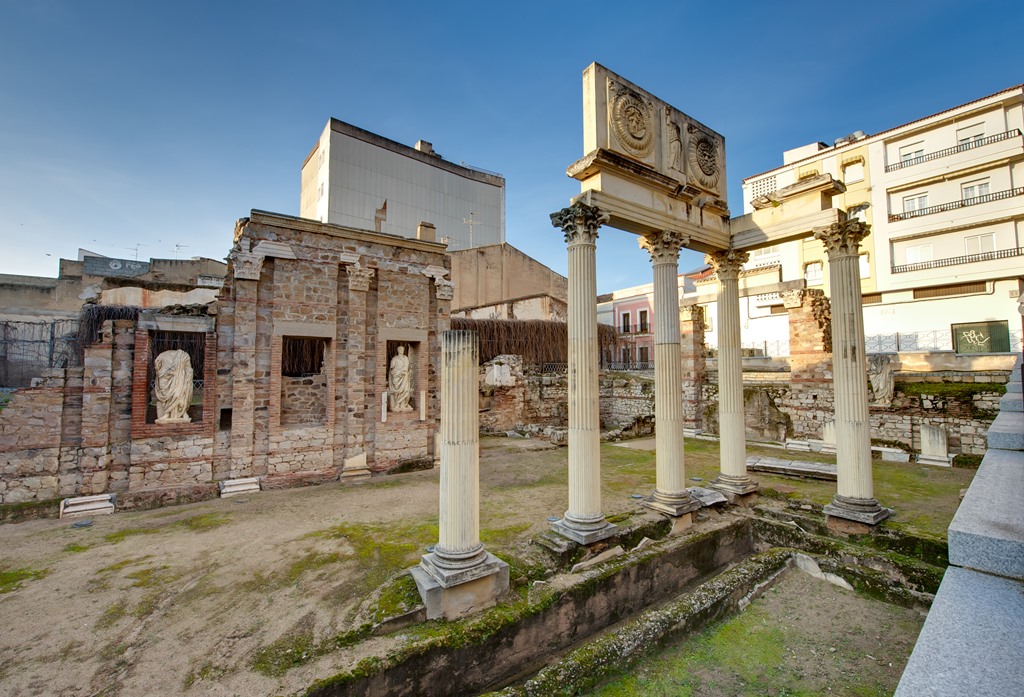 Porch of the Forum

To your left you can see Santa Eulalia Street, the city's authentic life artery which allows what was once the axis of the Roman colony, the Decumanus Maximus, to live on. This pathway divided the city from west to east, from the bridge’s gate, over the Guadiana River, to where you currently find yourself – a where was another gate was located; hence, this square's name: Puerta de la Villa. The Decumanus Hall has a fragment of the Decumanus Maximus on display just at its entrance, with its diorite and quartzite slabs, as well as the remains of the porticoes that flanked it. Once inside the aforementioned Hall, it is worth admiring a quite unique archaeological artifact: a Roman cistern used by the early Christians of the area as a makeshift church.

Traveling over Berzocana and San José Streets, you soon arrive to Sagasta Street. The first thing you encounter is the so-called PORCH OF THE FORUM (3). This is the corner of a monumental portico which was part of the massive propaganda program of the ancient Emerita Augusta City Forum. This portico was built towards the middle of the first century to resemble the image and likeness of the Forum of Augustus in Rome. Continuing further down Sagasta Street, you arrive to the TEMPLE OF DIANA (4), an Imperial Cult Temple located at the bottom of a big square which was partially leveled, as some areas house the remains of a cryptoportico. The temple, rectangular in shape, stands on a high podium of granite that culminates in pieces of moulding. Atop it rests the colonnade whose granite drums were plastered and painted. This colonnade surrounds the entire temple and was probably built while still under the power of Augustus. Its exceptional state of preservation is because, for centuries, the temple served as the foundation and shell of the renaissance palace of the Count of los Corbos, some parts of which are still preserved.

Venturing over the entire Romero Leal Street, where some of the stately mansions of the nineteenth century or the beginning of the twentieth century still remain, you reach the ALCAZABA CULTURAL CENTER (5), in whose interior you can see the remains of roman city blocks bounded by era roads. These blocks present a hodgepodge of structures from various times and with various functions – a high-imperial public space of which a large pond still remains, a pond which was subsequently reused for the construction of some thermal baths.

Before arriving to Plaza de España Square, you must pass by Plaza del Rastro Square, where you can admire the façade of the Santiaguista Conventual. Access to the building is through a door with a rounded archway. The keep is attached to the main body of the Convent – it is a solid cube with a single, minuscule opening for light. Attached thereto, you can see the façade of the Priory Church, renovated to house a conference hall. Today, this building is the headquarters of the Presidency of the Regional Government of Extremadura. 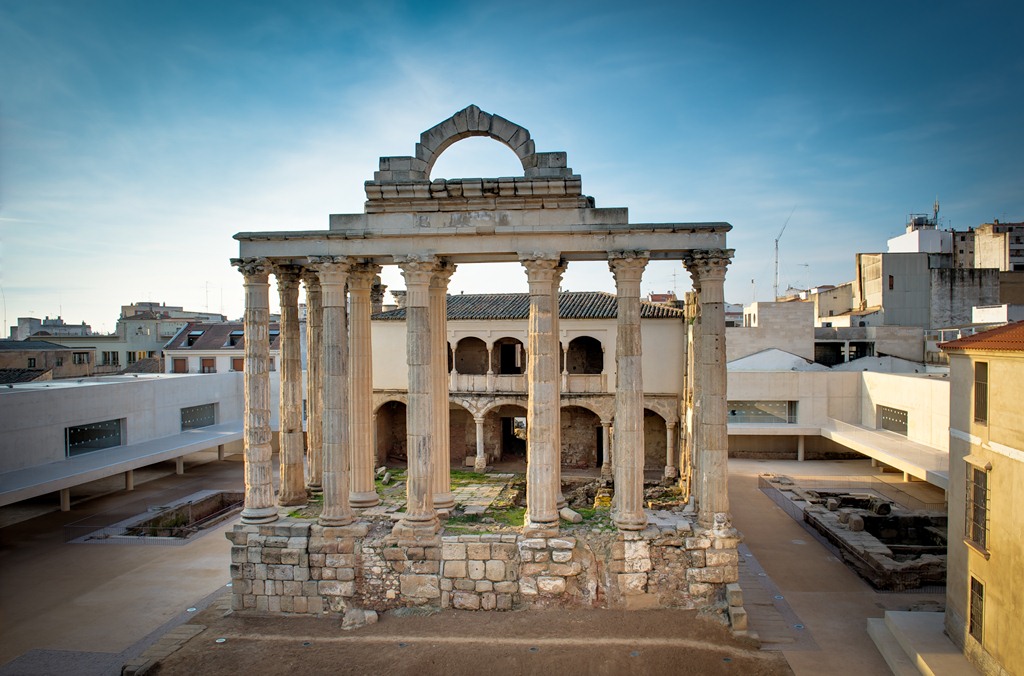 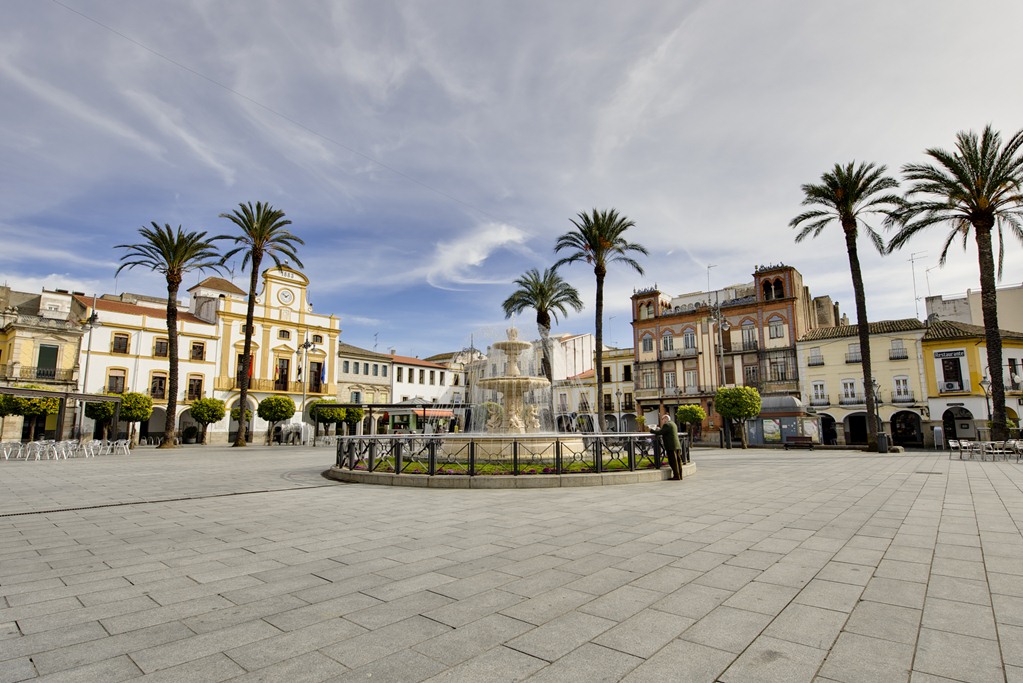 In the PLAZA DE ESPAÑA (6) noteworthy is the presence, in its center, of a neo-baroque fountain made of marble from the end of the nineteenth century – the masterpiece of the workshop located in Lisbon that belonged to Germano José do Salles. From a great circular pond emerges a pedestal with amorini who, riding atop dolphins, go by sounding horns. The arcades which remain, and which surrounded the whole area, are the result of several renovations. The oldest building of all those surrounding the Plaza de España is the CO-CATHEDRAL OF SANTA MARIA (7). The finding of some Visigoth pieces leads experts to believe that here the famous Parent Cathedral of Santa María of Jerusalem was once located – with its Baptistery, the Bishop’s Palace, and the courtyard that united them. What is certain is that, once the city was reconquered, a chapel was erected here which was progressively increased in size. Today, it is seen as an archaic Gothic piece; that is to say, a very solid, stocky temple with simple pinnacles at the apse.

Around the square you can also see the Palace of The Mendoza and the House of The Pacheco, as well as the Círculo Emeritense Society, the Town Hall and the China Palace.

Going up Santa Julia Street, you have access to the old OLD CONVENT OF SANTA CLARA (8), a convent that belonged to the Nuns of the Order of Santa Clara and that was not properly finished until the seventeenth century. It is a distinctive classicist Baroque piece, in spite of the many ups and downs that its construction had. Its interior houses the Visigoth Collection, which contains a multitude of artifacts from what was Visigoth Mérida, especially decorative pieces (cymatia, pilasters, windows, columns, trusses) and pieces which were part of the liturgy in the churches of Mérida's powerful bishopric – cancelli screens, fonts, altar tables. You can also find laudas, or sepulchral inscriptions, of the Christians of that era – as well as gold pieces, pottery, and glass pieces.

Through a narrow alley that runs between the apse of the ancient Church of Santa Clara and the rear of the House of ThePacheco, you arrive to the isolated Plazuela de Santa Clara Square, which is attached to another Square facing the building of the old HOSPITAL OF JESUS NAZARENO (PARADOR) (9), today the headquarters of the Assembly of the Autonomous Region. This Franciscan foundation is Baroque in style, having plinths and corners of granite, while the rest of the stonework and the main entranceway are made of brick. Its interior is structured around a porticoed courtyard with two floors, the first with rounded archways and the second with a gallery of segmental arches. 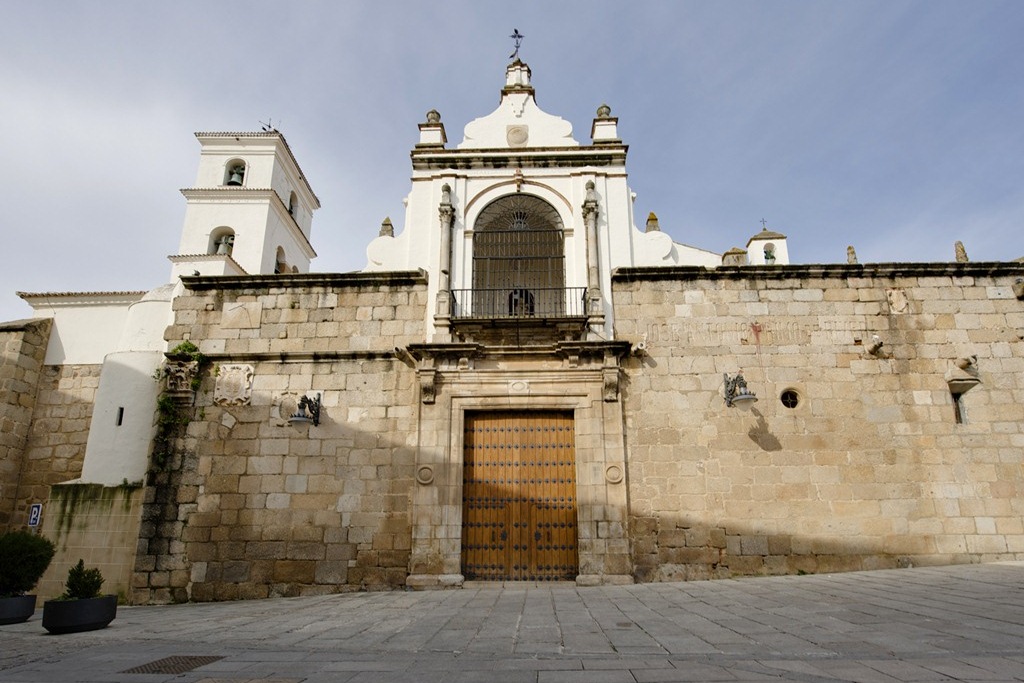 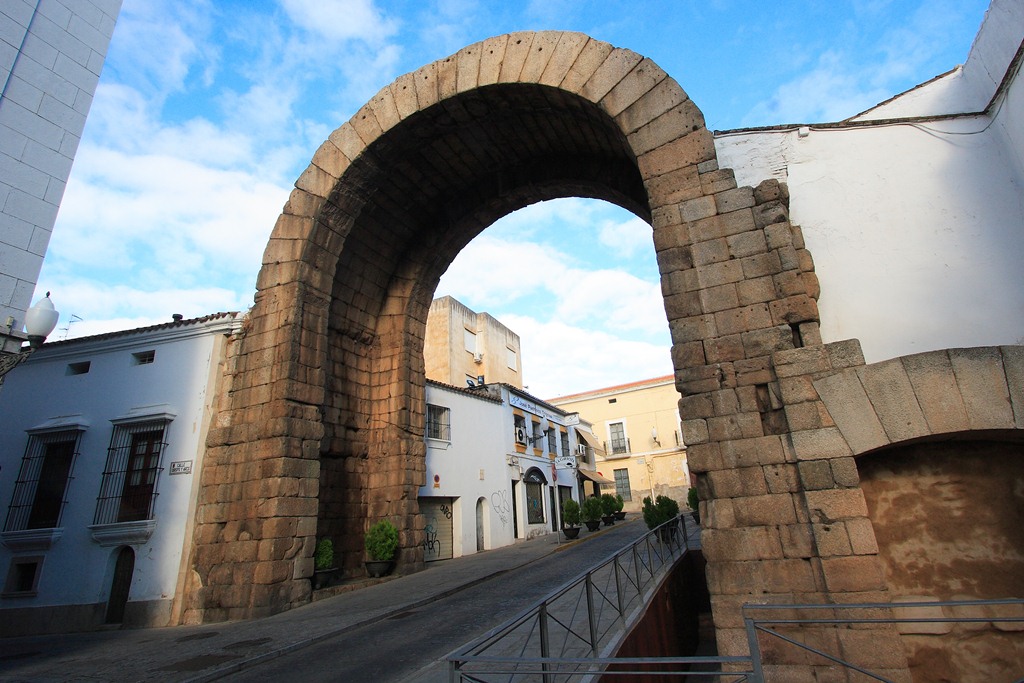 Very near there is the ARCH OF TRAJAN (10), which was the monumental access gate to the sacred space (temenos) that surrounded a giant Imperial cult temple. The rounded archway, which has a height of 15 meters, was the central opening of a door with three arches, the two side ones being smaller and segmental. Its entire structure was done with granite ashlar masonry. Next to the arch is the old Concepcionistas Conventual, which mixes the styles of the Renaissance and Baroque.

A few meters away, moving up San Francisco Street, is the ancient HOSPITAL OF JESUS NAZARENO (11), a building on which renovations have not ceased since its initial construction back in 1725. It was a convent, a hospital for poor people, a field hospital, a prison, and a museum. Today, this building houses one of the most luxurious and oldest "Paradores" of Spain, inaugurated by none other than King Alfonso XIII. It is worth entering and seeing the small cloister in its interior. Its columns, from Roman or Visigoth buildings, house Kufic inscriptions in Arabic with invocations to Allah.

If you go down Holguín Street a few meters, you will find the remains of the Temple of the Provincial Forum, of which only a corner of its podium can be seen. Its core is made of concrete lined with ashlar masonry. Some of the fragments of columns that remain, all made of marble, prove the magnificence with which this building was built and, above all, its colossal nature – the podium alone is 3.10 meters high in the area that remains preserved.

Very close to the remains of this temple, and to the end of this tour, you can find the CHURCH OF EL CARMEN (12), which was erected by the Order of the Barefoot Franciscans in the mid-eighteenth century, becoming a mental hospital after the Spanish confiscation. The church bears, on its façade, curious city coats of arms. It is yet another classicist Baroque piece – the most prolific of the city.