Apart from allowing you to get to know the ruins of the Circus, the place where the ancient people of Mérida unleashed their passions, this route will impress you for two reasons: firstly because you will discover that the Romans combined engineering and monumental beauty and secondly because if you follow this route, you will get a clear idea of the importance of Mérida during the beginning of Christianity on the Peninsula, as well as getting an idea of what the city’s Martyr Eulalia has always meant for the inhabitants. The route's total distance is 2.69 kilometers.

The route begins at Avenida Juan Carlos I with a visit to the ROMAN CIRCUS (1), one of the best-preserved circuses of the Empire and, likewise, one of the most impressive ones. Its dimensions are proof of that (403 meters long by 96.5 meters wide). Once there, you can visit the Circus Interpretation Center, which has a lookout point at the top that allows for a panoramic view of the entire outline of the circus. Additionally, in its exhibition hall, the visitor can learn about different aspects of Roman circuses through educational resources: information panels, models, and audiovisual materials.

Just a few meters away, across from the Circus, you will find the SAN LÁZARO/RABO DE BUEY AQUEDUCT (2) . This aqueduct allowed for the Albarregas Valley to be covered with a water pipeline network whose origins came from underground springs and streams located to the north of the city, and a large part of its sections still remain today. The ancient road used to pass under the towering arches that remain of this aqueduct, a road which would later branch off towards Cordoba and towards Toledo and Zaragoza. In the sixteenth century, the Roman aqueduct was unusable. Instead of restoring it, the City Hall opted to build a new one, all of which still remains. Very near this aqueduct, remains of some Roman baths can be seen. 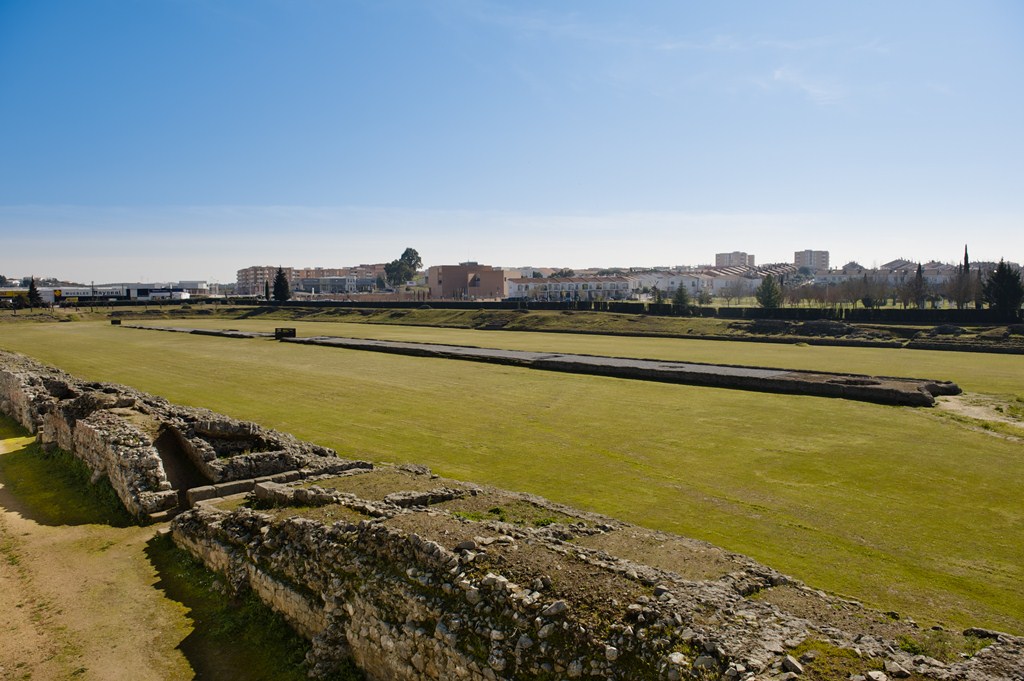 Crossing one of the arched walkways of the aqueduct, you will enter into the Santa Catalina Neighborhood, whose western end houses the XENODOCHIUM (3), the ruins of a hospital from the Visigothic period. What remains is a central building that faces east to west and is rectangular in shape. It culminates with an apse, which is flanked by separate rooms whose walls have buttresses.

To get to the next destination, you have to cross the train track underpass. You will come to an extensive plot of land on which, until not long ago, the “Hernán Cortés” Artillery Base stood. The archaeological excavations that have been undertaken here for several years have unearthed a large number of Roman tombs, as well as the remains of some suburban mansions. Near there, in the shadow of a contemporary block of flats, you will find the THERMAE AND SNOW PIT (4), a complex from the Roman era that, since being discovered in 1920, has had different uses attributed to it by scientists: thermae, baptistery, a religious site for an unknown religion, glass factory, and even a complex for the storage and distribution of water. Today, everything seems to indicate the existence of a pit to hold snow in the lower circular chamber (from the high-imperial period), while the rooms on the upper level (from the third or fourth century AD) could have been used as thermae. What is certain is that, between the seventeenth and nineteenth centuries, a variety of sources say that these structures were used to store Mérida's snow.

If you move towards the next destination via the Rambla de Santa Eulalia, you'll come to a secluded corner that ties the López de Ayala and La Rambla parks together. This is where the obelisk stands that the inhabitants of Mérida from the seventeenth century constructed in honor of Saint Eulalia with exceptional pieces from the Augustus Temple of Concord. 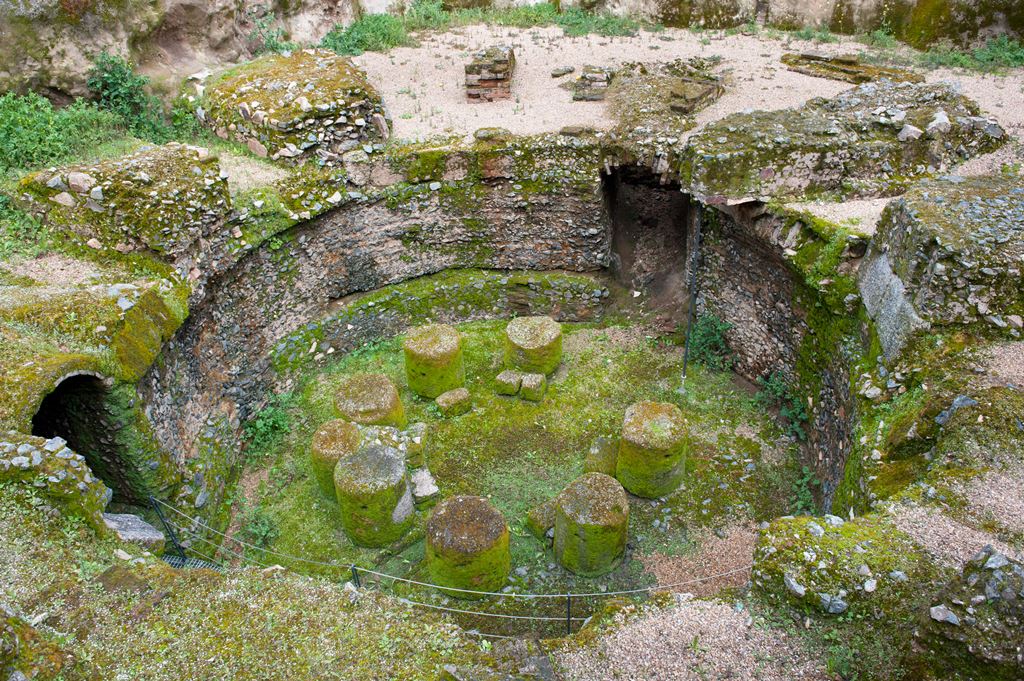 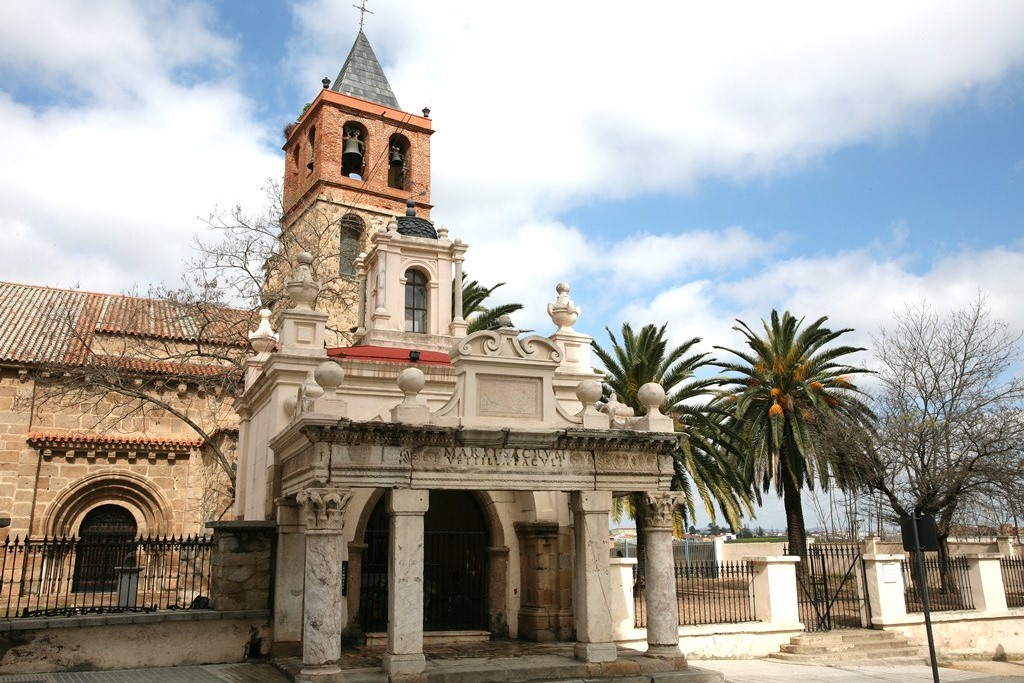 Basilica of Santa Eulalia and Hornito

Going up Avenida de Extremadura, you will arrive to the site of the BASILICA OF SANTA EULALIA and HORNITO (5) and (6). At the access point to the atrium of the Basilica of Santa Eulalia, you will see a building of small dimensions that it is an oratory dedicated to Eulalia. This building is popularly known as the “El Hornito” Chapel. Its portico is made with pieces of marble extracted at the beginning of the seventeenth century from an unknown site in the city. All of them belonged to the Temple that the Roman Colony dedicated to the God Mars.

Once inside the basilica, a collection of tombs can be seen from very different eras. For example, mausoleums from late Roman times of considerable size, like the one that is redecorated with paintings from the sixteenth century that depict Stations of the Cross, San Juan, Santa Ana and San Martín. Or the tomb sealed by a mosaic that depicts the deceased standing amongst curtains. Tombs of the Visigothic period sealed with marble slabs, like the one of the distinguished Gregory, which was later reused to bury Eleutherius and Perpetua. Burial crypts like those of the bishops, as well as the tombs of egregious local families from the sixteenth and seventeenth centuries, like those of the Moscoso or Mejía families.

Before leaving this monumental archaeological site, you can see that there is a building attached to the medieval church whose second floor is of renaissance style, with the whole second floor being made of rammed earth and brick. Meanwhile, the first floor is of Gothic style and built in granite. This is the Freylas de Santiago Convent, founded in the sixteenth century. At the end of Marquesa de Pinares Street, you will find the LOS MILAGROS AQUEDUCT (7), a colossal aqueduct that is part of a hydraulic system which brought waters from the Proserpina Dam. It is popularly known as “Los Milagros” ("The Miraculous One") because of the admiration that its state of conservation brings about in locals and visitors, despite the vicissitudes of time. And it lives up to its popular name, as more than eight hundred meters of this aqueduct still stand today and of some of its brick and granite piles rise twenty-seven meters above the ground.

At its north end, where the little valley of the Albarregas River starts, the construction had a type of pool to purify the water (piscina limaria – lime pool), serving at the same time as a water source. 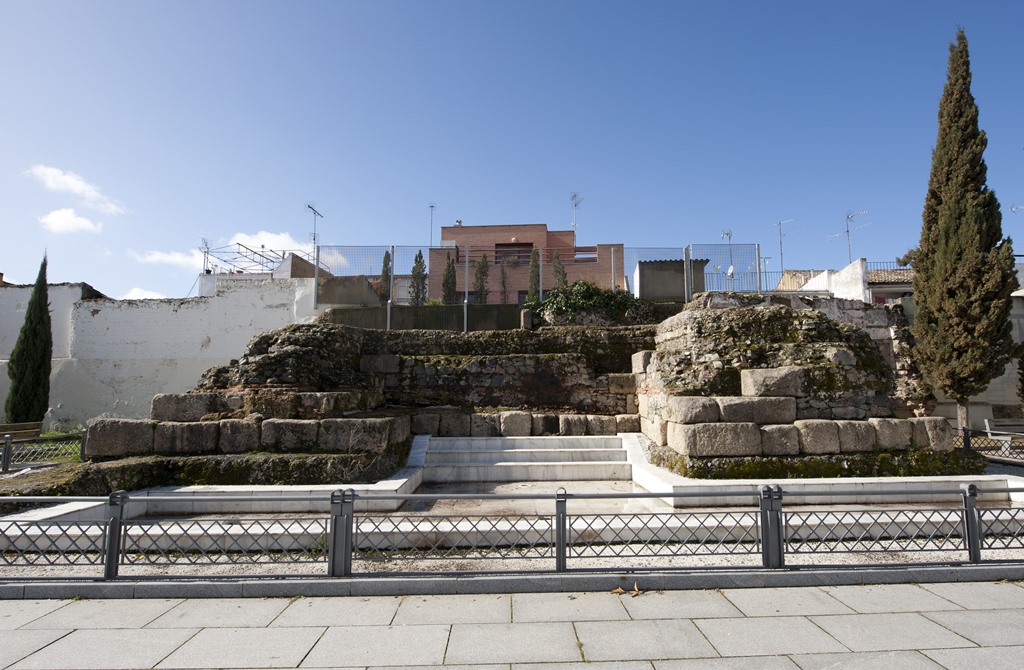 Following the course of the Albarregas, you will come to the ROMAN BRIDGE OVER THE ALBARREGAS RIVER (8). At this bridge, the main road that divided the city from east to west, the cardo maximus, and some other perimeter roads that circled the city from the west converged. From here, the road leading to Astorga began, known as the Vía de la Plata (Silver Route) – a road which is partially preserved in places about three kilometers north of the city, almost parallel to National Route 630.

To finish up this route, you can visit the CASTELLUM AQUAE (9) which is found at the highest point of the Cerro del Calvario (Calvary Hill). Until the mid-seventies, it was part of the Calvario (Calvary) Hermitage's structure, where the city's oldest Confraternity of Penitents had its headquarters. The demolition of this building allowed for the discovery of what was most probably the tower from which the waters coming from the Proserpina hydraulic system were distributed throughout the northern zone of Emerita Augusta.