This option allows you to get to know some of the buildings dedicated to entertainment and shows in a great capital of the Roman Empire, as well as to scratch the surface of the daily lives of the early people of Augusta Emerita and their ways of approaching death. The visit to the Museum will provide you with an idea of the keys to a civilization which is a comprehensive part of our culture. These visits are a must if you come to Mérida and you want to familiarize yourself with its glorious Roman past.

The ROMAN THEATRE (1) was constructed under the patronage of Agrippa, son-in-law of Augustus, between the years 16 and 15 BC, when the Colony was promoted as the provincial capital of Lusitania. Like the adjacent Amphitheatre building, the Theatre was built partly on the slope of a hill, something which substantially lowered the costs of its construction. The rest was built of concrete lined with ashlar masonry. Although the Romans were not very fond of the theatre, a city of prestige could not go without a building for the theatrical games. The Theatre at Emerita Augusta was especially generous in terms of its capacity: approximately six thousand spectators. The spectators were distributed from the bottom to the top of the stands in accordance with their social rank, being divided over three sections: the summa cavea, media cavea, and ima cavea – all of which were separated by corridors and barriers. All stands were accessed with ease by means of small staircases distributed radially around the caveas. Through hallways, it was possible to get to the access doors, or vomitoria. The semicircular space where the choir was located, the orchestra, has a floor made of marble from a later renovation. Behind the orchestra rises the wall of the proscenium, made with circular and rectangular exedras. The stage would have unfolded around this space. Originally, it was a wooden platform under which all the machinery for the theatrical rigging system was hidden.

Behind the wall of the scaenae frons, there was a large porticoed garden enclosed by walls with niches that were decorated with statues of members of the Imperial family. Along the axis of said portico, in line with the valva regia and the sacred space of the ima cavea, is the aula sacra (holy space) – a small, sacred space with an altar table where the figure of the Divine Augustus was honored.

At the west end of the Theatre's portico, the Theatre's House-Basilica can be seen, a dwelling whose excavating archaeologist, José Ramón Mélida, believed that the rooms that had apses with windows were part of a church where one of the first Christian communities met, hence the "House-Basilica" name. The house's entrance is to the west and faces a road made with flat slabs of diorite and that runs from east to west. The dwelling's fauces led to series of rooms that were organized around a porticoed courtyard in whose center the remains of a pond can still be seen. Some rooms still conserve the remains of mosaics decorated with geometric and plant themes. Apart from the floor of the apse area, which was possibly covered in marble, the rest of the room was decorated with a mosaic whose highlight was the presence of a krater inscribed in a square. 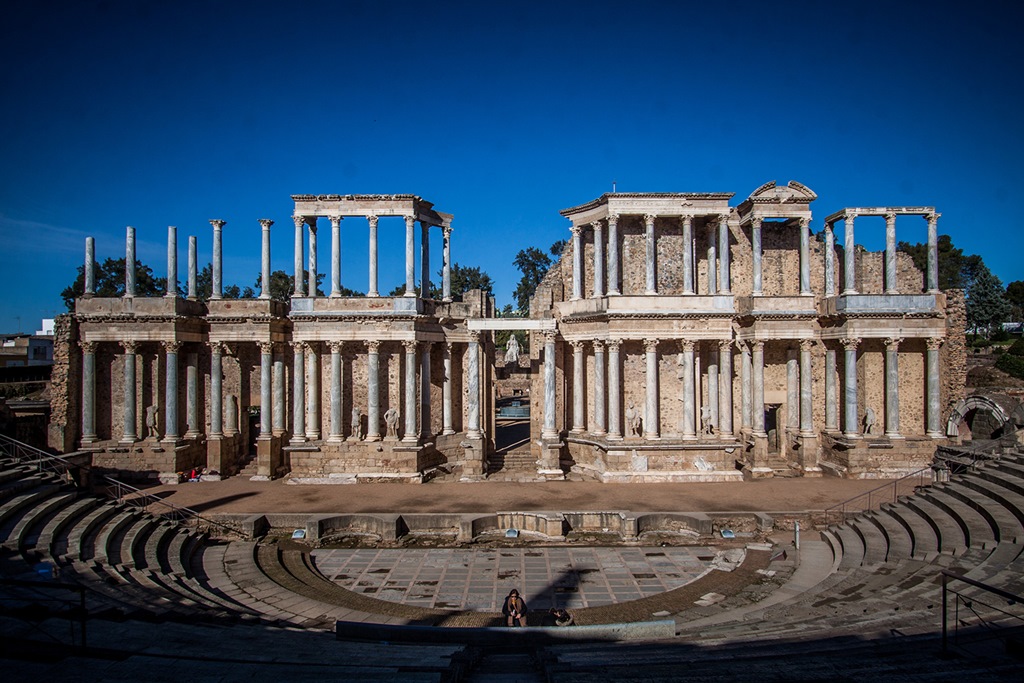 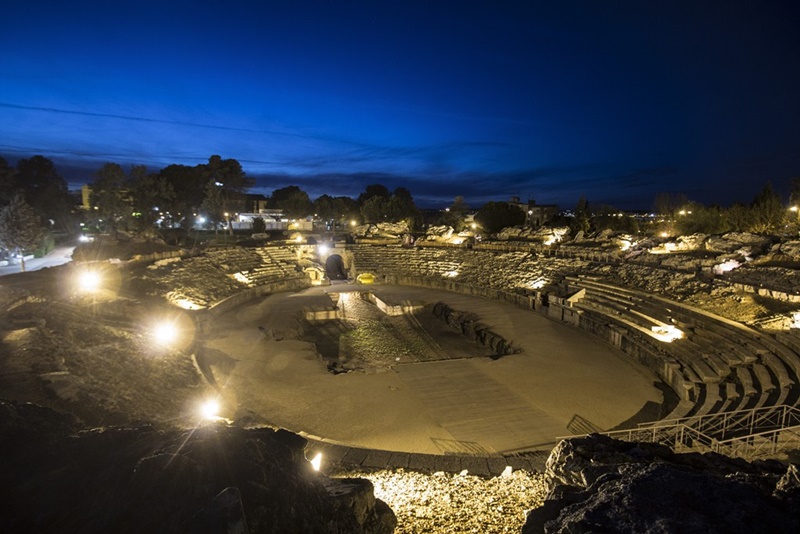 The AMPHITHEATRE (2) was built in 8 BC, as attested by the inscriptions found in its grandstand, and it served as the setting for very popular shows: the games of gladiators, hunts of wild beasts, and the struggle between wild animals in artificial settings recreating forests, jungles with lakes, or deserts – all atop the great wooden platform that was known as the arena. The approximate maximum capacity of this giant ring was between fifteen and sixteen thousand spectators.

Adjacent to the Theatre, the amphitheatre was separated therefrom by a road that surrounded both buildings. With fewer means, this building was raised in a similar way to the Theatre and, likewise, it was the result of various phases. To reduce costs, part of the grandstand stood on boxes filled with tightly-rammed earth. The facing of the walls was of local stone that had been smoothed down. Sometimes the layers of the walls' facing were evened out with a row of bricks. For the arches of the access openings, ashlar masonry was used featuring the characteristic bossage of the Augustinian period. The distribution of the stands was similar to that of the Theatre, although today only the ima cavea and some sectors of the media cavea are well preserved. Flanking the doors of the main axes, there are a number of rooms that were either used as cages for the wild beasts or as rooms where the gladiators got ready. The presence of a large pit can be seen in the arena. There, the wooden pillars that held up the performance platform were secured. Under said platforms, all the inventions necessary for the undertaking of such complex shows were hidden.

Located outside the aforementioned area made up of the Theatre and Amphitheatre, just a few meters away, is the HOUSE OF THE AMPHITHEATRE (3), an archaeological area that was outside the walls of Emerita Augusta in an area where houses coexisted with funeral and industrial spaces. It includes two houses: The Water Tower House, from the first century BC, and The Amphitheatre House, which had a longer life, from the end of the third century BC to the start of the fifth century AD. It currently cannot be visited due to work being undertaken.

To finish, you must visit the ROMAN ART NATIONAL MUSEUM (4), designed by the renowned architect from Navarre, Rafael Moneo Vallés. With its colossal dimensions, with the repeated use of the rounded archway, and with the use of brick and concrete, this construction recreates the great buildings of late Roman times, such as the Baths of Diocletian in Rome or the Mausoleum of Gordian in Thessaloniki. Once inside, visitors can admire one of the finest collections of Roman sculpture and mosaics of the Peninsula. Visitors to its exhibition halls will come to understand how a great Roman city worked and how a vast province, the westernmost part of the Roman Empire, was administered therefrom. Visiting this Museum additionally allows for the understanding of various aspects of the daily lives of the first people of Mérida. Its vault is home to, amongst other vestiges, remains of houses that could be found outside the city walls and which were decorated with interesting paintings, as well as some graves. 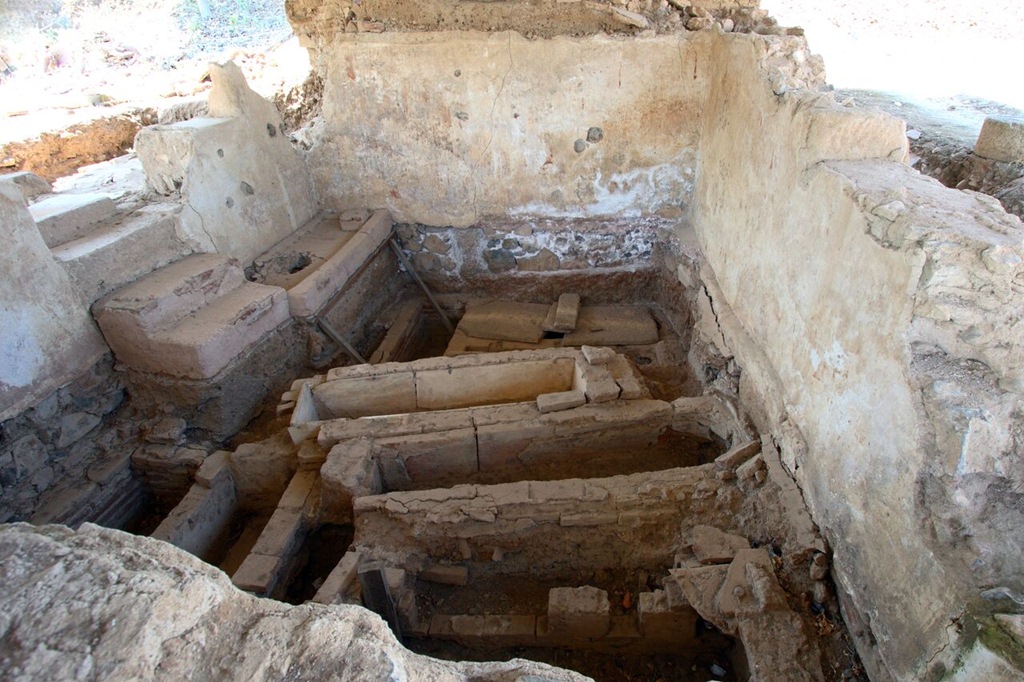 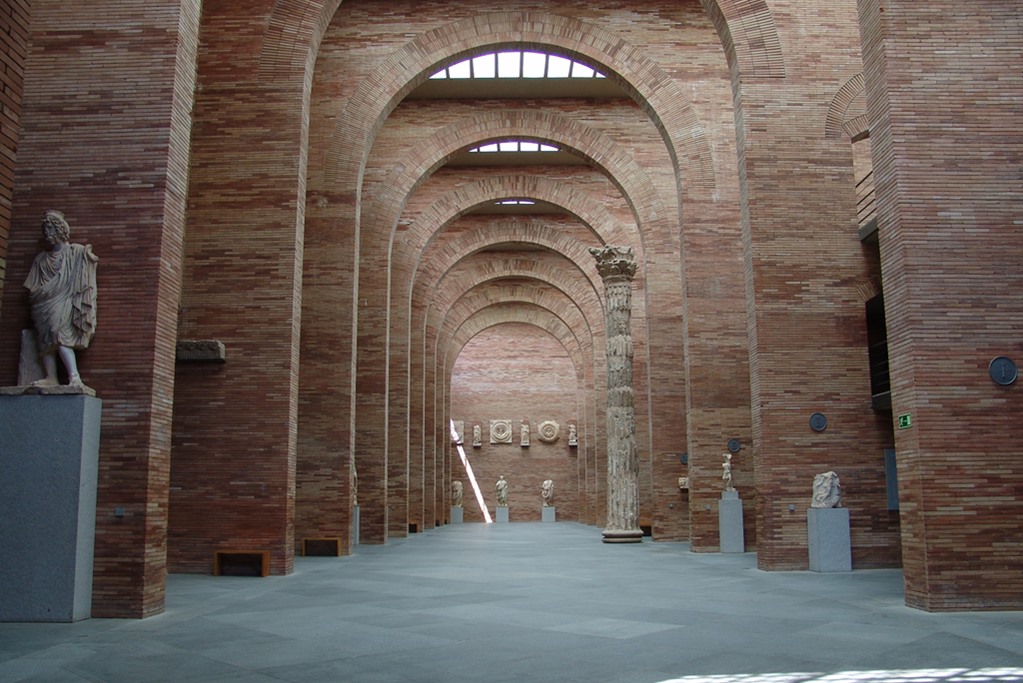