The Guadiana River is the great, green "lung" of the city of Mérida, dividing the city in two. Amongst its shores and the lush islands that form throughout its course, it is easy to see a large number of birds, some of which are: Cattle Egrets, Cormorants, Black-Headed Gulls, and, of course, White Storks.

This route runs near the largest of the aforementioned islands – the city's largest green area. It is called “La Isla,” and it is a park of almost two kilometers in length that meanders amongst monumental bridges from different period of history: the iron railway bridge, the work of the engineer William Finch Festherstone, built between 1881 and 1883; the spectacular Lusitania Bridge, a masterpiece by Santiago Calatrava, inaugurated in 1992; the one-of-a-kind Roman Bridge, which will be explained later; and, finally, to the south, the Puente Nuevo (New Bridge), the work of Carlos Fernández Casado, one of the most prominent Spanish engineers of the past century. It is here where our city was forged and where the bloodiest episodes of local history took place. This is also where several archaeological sites seem to accumulate, without our knowing exactly how they fit together, and where a unique building was erected: the Alcazaba (Fortress). Lastly, also reflected in the waters of the Guadiana River is the city's new image, which includes new buildings by some of the most distinguished national architecture firms.

The route begins at the MORERÍA ARCHAEOLOGICAL AREA (1), a plot of land that measures 14 m2 and that, until the beginning of the nineties of the last century, was the location of the modest Morerías neighborhood. Today, it is one of the largest urban archaeological sites of the Peninsula. In Morerías, the longest stretch of Roman wall that has ever come to light is preserved, showing us not only its original stonework (whose preserved width is almost three meters and whose height could be up to eight meters) and the reinforcing structures that, late in the Empire, were attached thereto, but also doors, portholes, and patrol passages. But what Morerías really gives us is a clear view of the evolution of urban design in Mérida from the first century until the Visigothic period. We see how porticoed roadways were modified little by little, as well as the houses and blocks where they lay. And, above all, the so-called “Los Mármoles” ("Marble") Home, which acts as proof of the lavishness of a home at the end of the third century, a time when the city was at its peak.

When leaving the site, at the roundabout that takes you to the majestic LUSITANIA BRIDGE (2), you can see a fountain with a full-scale replica of Augustus dressed as a legion general, a true copy of the marble statue found at Prima Porta, today housed in the Vatican Museums.

If you continue along Paseo de Roma, you arrive to the ROMAN BRIDGE (3), one of the longest of ancient times, and whose construction gives meaning to the existence of this city. Likewise, because of its strategic value, it was a crucial element for trade and for all the wars that took the western side of the Peninsula as their stage. The bridge, a work from the times of the Colony's founding, is built entirely of concrete lined with granite ashlar and is today composed of sixty rounded arches, being nearly eight hundred meters long and twelve meters high at its highest point. The strong pillars on which the arches rest have rounded cutwaters upstream in places that could be more affected by currents. In addition, the piles of these sections are perforated with small arches to act as weirs in order to reduce the resistance to the current brought on by a piece of work that is as robust as this bridge. Don't leave the bridge yet, as from here you have a superb view of the Emir's Alcazaba, the Roman Dike (which will be seen later on), and current Mérida. 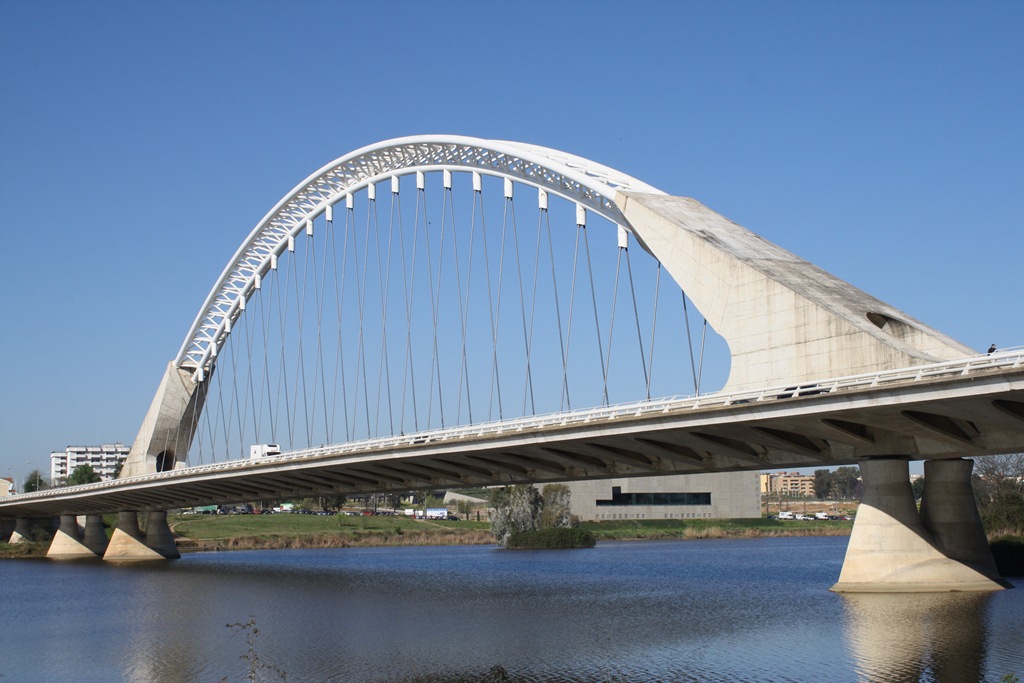 From here, you can admire how modern-day Mérida has arranged its façade to face the river with a significant sample of our contemporary architecture. Thus, to the right side, you can see the colossal administrative building for the new governmental offices that Juan Navarro Baldeweg built atop the Morerías ruins. To the left, next to the bridge's starting point, sits the Public Administration School, designed by Javier Saínz Oiza. To its left there is a fountain with a representation of the god Oceanus, the work of Aurelio Teno, a sculptor from Córdoba. Amongst the tuft of trees, we can see another sculpture set, this time a work by Rufino Mesa called “Las Siete Sillas” (“The Seven Chairs”). There are seven granite blocks that symbolize the summa cavea of the Roman Theatre as seven shelves for books. Further back, you can see the gray mass that is the NATIONAL PUBLIC LIBRARY (5), designed by Luis Arranz. And, beyond the Lusitania Bridge, two giant blocks of concrete and glass are home to the CONFERENCE AND EXHIBITION HALL (4). The architects Enrique Sobejano and Fuensanta Nieto came up with this original building as a relief work – the entire wall of this building is composed of hundreds of concrete slabs that reproduce the layout of Mérida's archaeological ensemble.

Before entering the site of the Moorish Alcazaba, in the center of a small roundabout, you can see a replica of the Capitoline Wolf, a gift from the city of Rome to Mérida.

THE ALCAZABA (ARAB CITADEL) (6) is a large fortress that was built in Muslim Mérida by Umayyad Emir Abd ar-Rahman II in 835 AD. In charge of laying it out was the architect Abd Allah. To build this Alcazaba, the oldest of the Peninsula, inspiration was drawn from Byzantine models. The purpose of this fortified palace was multiple in nature: to serve as a headquarters for Umayyad administrative offices and as a residence for the local governor. However, above all, it was used to filter access to the city from the Roman Bridge, the shelter of the Arab minority during the repeated local revolts against Cordovan power, and the square where troops belonging to the Emir were stationed – either to quell the revolt of the Meridíes Mozarabs or to carry out bullying raids in the Christian kingdoms of the North.

On the inside, noteworthy is the presence of a cistern for water storage, the only of its kind in the Peninsula's archeology, having been built with Roman and Visigothic decorative architectural pieces. A mosque was located on the floor above the cistern. It was subsequently converted into a church and its outline remains today. What was once the third floor, where perhaps a signal tower was located, does not remain today. 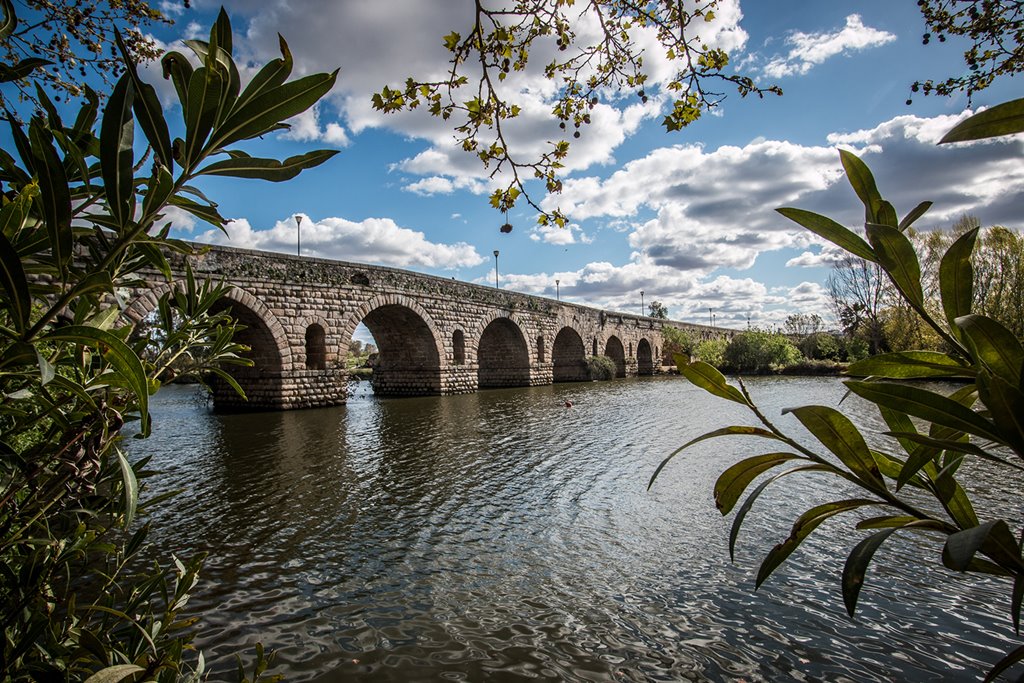 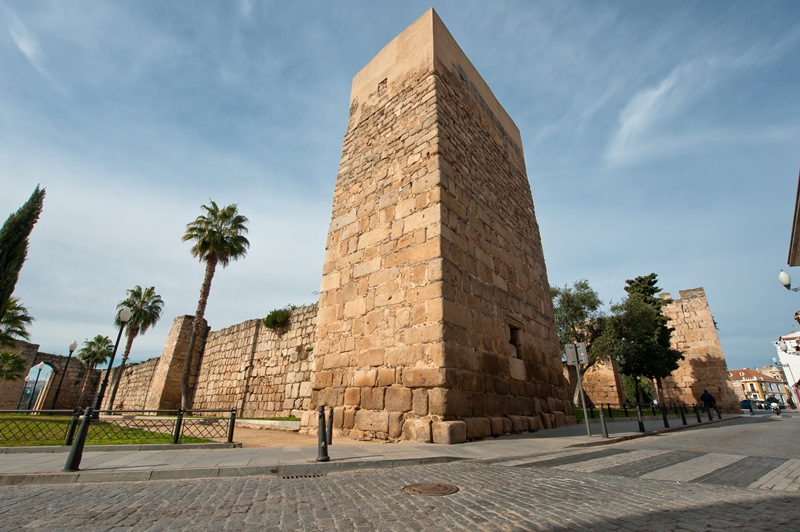 Few cities of Hispania were developed as thoroughly as Emerita Augusta. Further evidence of this is the existence of an extensive ROMAN DIKE (7) at the right shore of the Guadiana River. It is that stocky wall with buttresses, bossaged plinth blocks of ashlar masonry, and the rest of the elevation with stonework that you can see extend from the Alcazaba to the place where the canopies of the public parking lot stand.

Originally the dike ran the entire stretch of the city that faced river; that is to say, from the bricked blocks of flats that can be seen in the background up to a few meters beyond the Lusitania Bridge. It is possible to observe how the section of the Alcazaba's wall that faces the Guadiana sits atop a stretch of the dike.

Leaving the bank of the river, and delving deeper towards the interior, you will come across the PLAZA DE TOROS (BULLRING) (8), a work by the famed architect from Badajoz, Ventura Vaca. It was inaugurated in 1914. During the foundation works in the arena, a set of Roman sculptures appeared, some of which were donated by a prominent priest in charge of the cult of the god Mithras.

On a site adjacent to the bullring, you can find the so-called HOUSE OF MITHRAEUM (9), a dwelling built at the end of the first century and the beginning of the second century AD outside of the walls of the city, with no restrictions for growth. Without a doubt, its extension and the decoration of some of its rooms suggest that its owners were important players in Mérida's society, trained in the Hellenistic culture. In one of the rooms of the house, the Cosmos mosaic remains. It depicts, with great color and realism, a jumbled collection of human figures that come to represent the different components of the known universe, starting with the elements of the land and the sea, and continuing until reaching the sky – all revolving around a main figure, that of Eternity (Aeternitas). Before leaving this space, a group of sculptures in bronze of colossal size emerging from the south has surely caught your eye, they are located just behind the Casa del Mitreo. They represent a work of compassion by the sculptor Juan de Ávalos, raised in memory of all the fallen people of Mérida in all wars. From the Casa del Mitreo, through a long corridor flanked by Cypress trees, you arrive to an open space in which you can see the different types of funeral rites and the various traditions that the people of Mérida had throughout history to remember their dead. You are at the COLUMBARIUM (10). At the back, in a small valley, two buildings of small proportions stand tall. Originally, they had no roof. The funerary urns of two families were placed in these buildings: the Voconios Family and the Julios Family. Following a footpath, to the south, you will find the remains of two semi-buried mausoleums with a barrel vault roof, constructed in concrete (opus caementicium). They were accessed via a small staircase. In their interior, the arcosolia can be seen where the funerary urns may have been placed. This funerary site is from the first century AD.

The route ends a few meters from the Columbarium, to one side of Ensanche Avenue you can see the hydraulic system that, coming from the Cornalvo Reservoir, supplied water to the city's southern area. What is preserved are the remains of the water channel (specus), inlaid in the face of the Roman wall which, judging by the layout, seems to turn towards the place where the water distribution tower stood – a place that, possibly, is where the Bullring is located today. Of the four hydraulic systems that provided the city with water, this is the only one whose true name we know: "AQUA AUGUSTA."